Antifreeze Is a Sweet but Deadly Poison for Pets
Winter is officially here – the temperatures are dropping and frost is on the ground. Even though we rarely get snow here in Woodland, it is important to know the dangers of antifreeze (and other winter items lurking in the garage). We’ve borrowed this article from our friends at the Humane Society of the US. 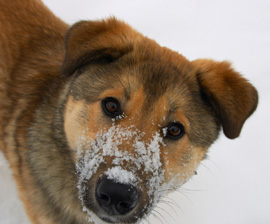 Ethylene glycol, the main ingredient in most antifreeze brands, has an inviting aroma and a sweet flavor. Its appealing smell and taste often tempt animals and children to drink the highly poisonous substance.

Take precautions against poisoning your pets
In 2012, manufacturers voluntarily agreed to add a bittering agent to antifreeze, but pet owners should still take precautions.

Keep antifreeze out of the reach of animals and know the signs of antifreeze poisoning. It only takes a few tablespoons of highly toxic antifreeze to seriously jeopardize an animal’s life. Families can help save their own pets from an encounter with antifreeze by closely watching the animals in areas where antifreeze may be accessible, such as roads, driveways or garages.

To reduce the risk of poisoning, all brands of antifreeze should be handled carefully and treated as highly poisonous. Ensure that antifreeze is stored well away from animals and children, antifreeze spills are completely cleaned up, and leaks are immediately repaired.

What you can do to protect your pets
1. Switch to a brand of antifreeze that contains propylene glycol instead of ethylene glycol. Note that although it’s safer than ethylene glycol antifreeze, propylene glycol antrifreeze is still toxic.
2. Keep antifreeze sealed and away from animals; clean up spills immediately and thoroughly. Fix any leaks right away.
3. Don’t allow your pet to wander unattended near driveways, roads, garages or other places where she could come into contact with antifreeze.
4. Keep other products that contain ethylene glycol—like paint, cosmetics and novelty snow globes—out of the reach of animals. This goes for any product with unknown ingredients.
5. Monitor your pet for strange behavior. If you think she may have ingested antifreeze, take her to a veterinarian immediately.

How to detect antifreeze poisoning in your pets
For pets exposed to antifreeze, the first few hours are critical. Animals who receive immediate veterinary care can recover successfully—but the longer they remain untreated, the less likely they are to survive.

Recognizing antifreeze poisoning symptoms is important—many pet guardians may not immediately realize that their pet has been exposed to the toxin until it’s too late.

Antifreeze poisoning occurs in two phases. In the first phase, the animal typically appears lethargic, disoriented, uncoordinated and groggy. Symptoms usually appear 30 minutes to one hour after ingestion and can last for several hours. If your pet is behaving this way, don’t delay. Call a veterinarian. Consider whether any of her activities could have brought her into contact with antifreeze.

The second phase, which can last up to three days, is characterized by symptoms such as vomiting, oral and gastric ulcers, kidney failure, coma and death.